The Importance of Cyber Security

Cybersecurity refers to the measures and techniques adopted to prevent unauthorized access and subsequent attacks to internet-connected systems, hardware and software programs and data. The focus of cyber security is about securing things that are vulnerable through information and communications technology, including non-information such as electronic appliances and traffic lights. Those who work in cybersecurity are essentially defending and protecting cyberspace. This is unlike the Information Security field – which is all about protecting information and generally focuses on the “CIA” confidentiality, integrity and availability of the information.

You’re doing a routine bank account check when you notice a strange charge. “Who on Earth ordered that?” you wonder. Suddenly, you see more charges, and it dawns on you: Your account has been hacked. You scramble to the phone to call your bank for help. They figure out how to reverse the charges, but now you need a new credit card, which can take weeks to arrive. If you’re lucky, the bank will have no trouble reversing those charges.

But what about situations that don’t have built-in safety nets? In 2013, a woman received a call from Kohl’s asking to discuss her newly opened account, which she hadn’t created. Someone had stolen her identity and ended up spending over $18,000 under her name.

There are a number of scary scenarios involving personal identity theft, business data theft (remember the Target fiasco?), and the potential for hackers to take over the power grid or health care devices. With all the things that could go wrong by not having secure digital systems, you would think people would prioritize their cybersecurity. But it turns out they don’t seem to care. In fact, many individuals seem pretty passive about how their information is handled online.

Modis wanted to get the scoop on what people really thought. So we surveyed over 1,000 people to learn about how they prioritized their cybersecurity. We even asked about what they would rather spend their money on just to see how important security is to them. Continue reading to learn more. 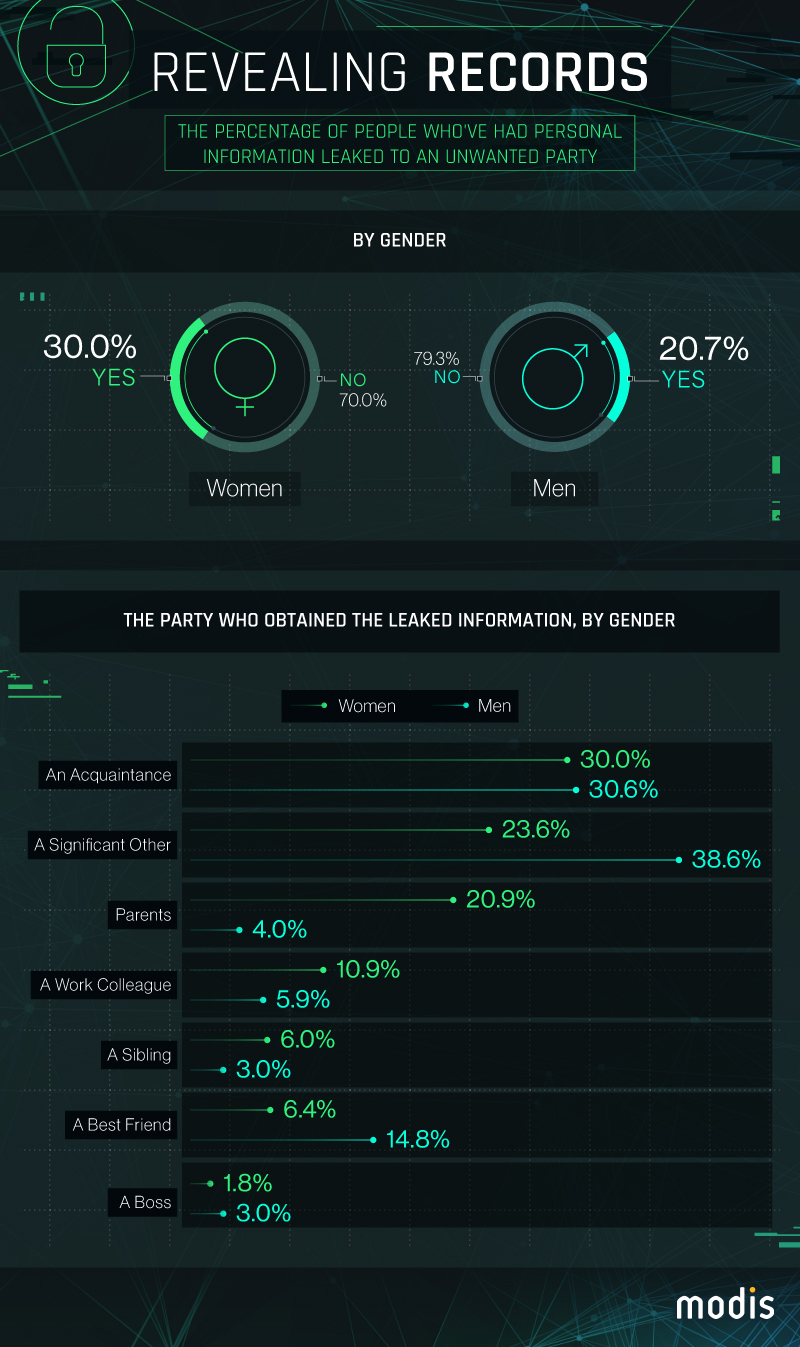 Private Information refers to information that an individual would want to keep confidential from the general public. This would include information such as credit card data, social security numbers, bank account information and passwords to important websites. The misuse of this private information can occur any time your information was utilized in a way that you didn’t initially intend – this can be as benign as unknowingly receiving an email from a sender who was unauthorized to contact you, to something more malicious, such as accessing of trade secrets to outperform a competing business.

Some real world examples of misusing information includes the infamous Uber “God View” incident – “God View” enables corporate-level Uber employees to track Uber vehicles and customers. In 2014, an employee violated the company policy by using the tool to discover the whereabouts of a journalist who was late for a meeting with another Uber executive. Uber’s privacy policy prohibited employees from viewing ride history except for “legitimate business purposes”.

More recently, AT&T found themselves in the center of an investigation by the Communications Commission after it was discovered their employees were selling the social security numbers and names of over 280,000 customers to third parties for the purposes of unlocking mobile devices.

There are many actions you can take to ensure your personal information is not misused. Modis has put together a complete list of common forms of cyber security breaches and provides tips on how both customers and companies can better protect themselves.

Maybe it’s happened to you. Someone you know confronts you about a photo or email you really didn’t want him or her to see. Perhaps it was posted online for everyone to view, putting you in a really uncomfortable position. Even if it hasn’t happened to you, you’re still at risk.

We first looked at the percentage of people who’ve had their information leaked to an unwanted party. Thirty percent of women and nearly 21% of men said they have. But who were these unwanted parties? When it came to women, the majority indicated it was an acquaintance (30%), while men said it was their significant others (almost 39%).

If you’ve ever had to freeze a credit card after the number was stolen, you know how frustrating it can be to deal with identity fraud – not to mention frightening!

Participants categorized the types of data they considered most sensitive. Credit card information and Social Security numbers were both ranked a 4.6 on a scale of one to five, with five being extremely sensitive. However, respondents felt business emails (3.4), purchase histories (3.5), text messages (3.7), and personal photos (3.7) were less sensitive. 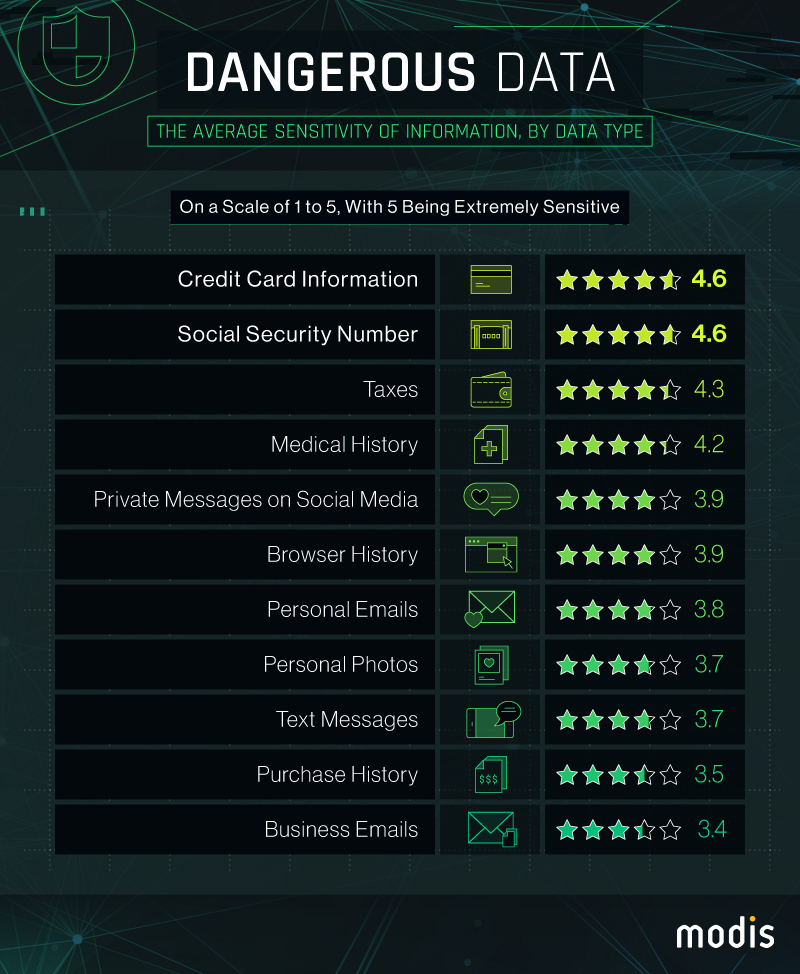 If you’ve ever had to freeze a credit card after the number was stolen, you know how frustrating it can be to deal with identity fraud – not to mention frightening!

Participants categorized the types of data they considered most sensitive. Credit card information and Social Security numbers were both ranked a 4.6 on a scale of one to five, with five being extremely sensitive. However, respondents felt business emails (3.4), purchase histories (3.5), text messages (3.7), and personal photos (3.7) were less sensitive. 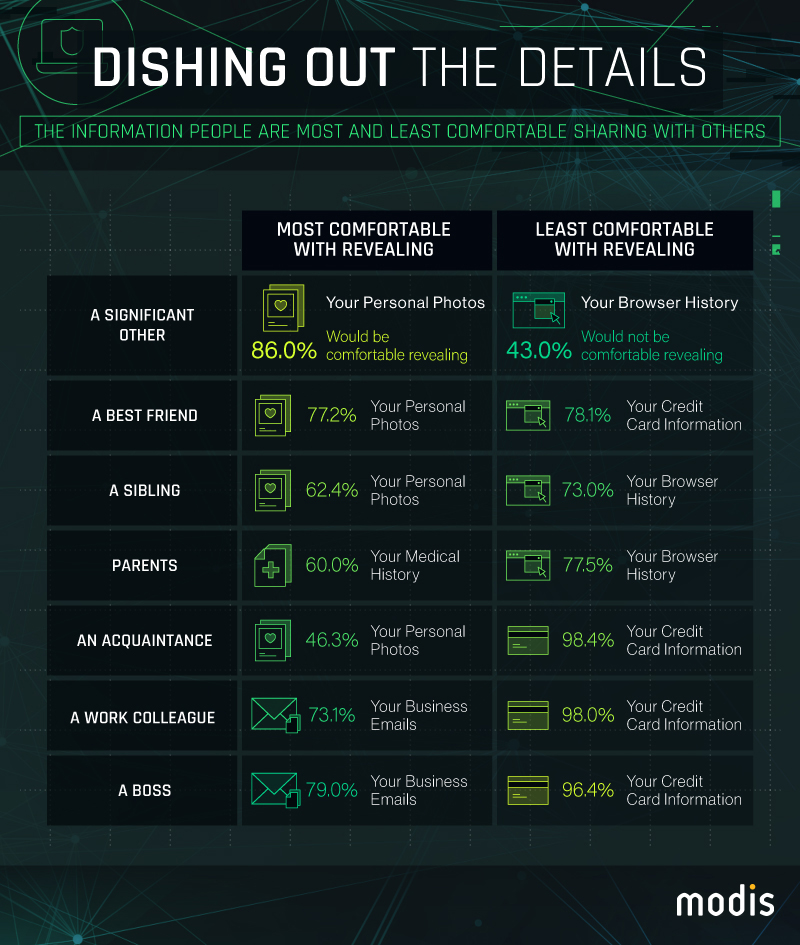 We all have personal information we’re usually willing to share with certain people, but how comfortable would we be to receive some of this information? We had respondents rank the information they would be most or least comfortable with specific people being privy to. 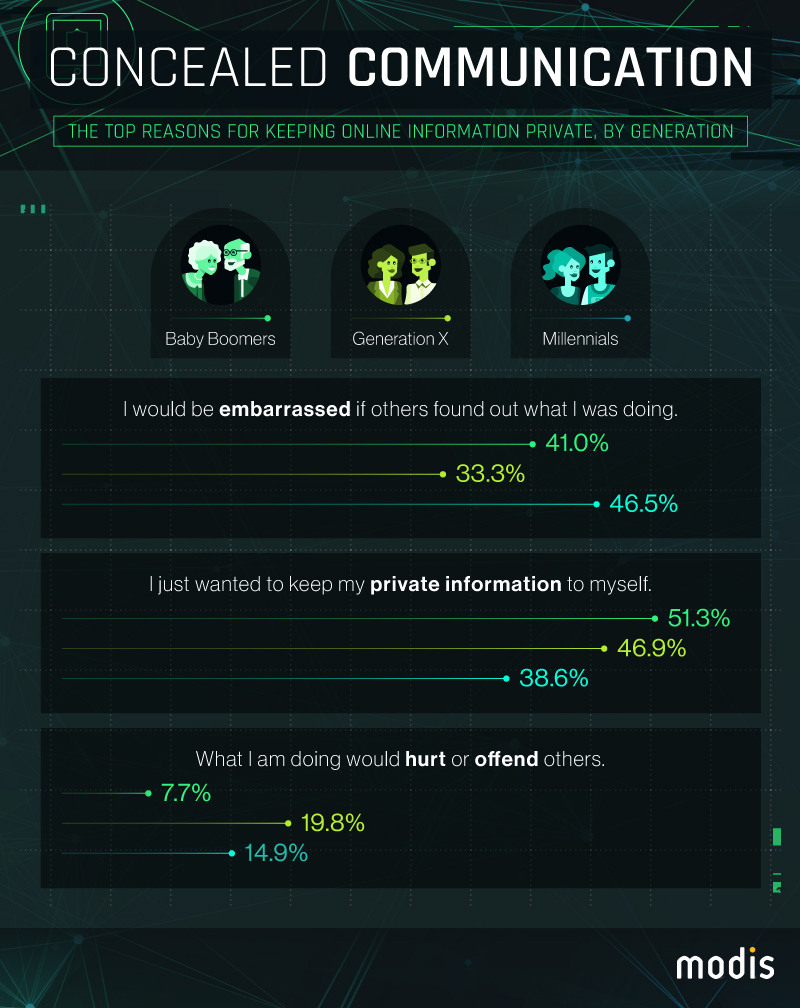 Next, we looked at the top reasons baby boomers, Gen Xers, and millennials kept their online information private.

Millennials were the most likely to say they would be embarrassed if anyone found out what they were doing (almost 47%), with baby boomers close by at 41%. However, baby boomers cited wanting to keep their private information to themselves as the top reason for protecting their data (over 51%). Gen Xers also gave this reason at a rate of nearly 47%. Interestingly, Gen Xers were most worried about hurting or offending others with what they were doing (around 20%). 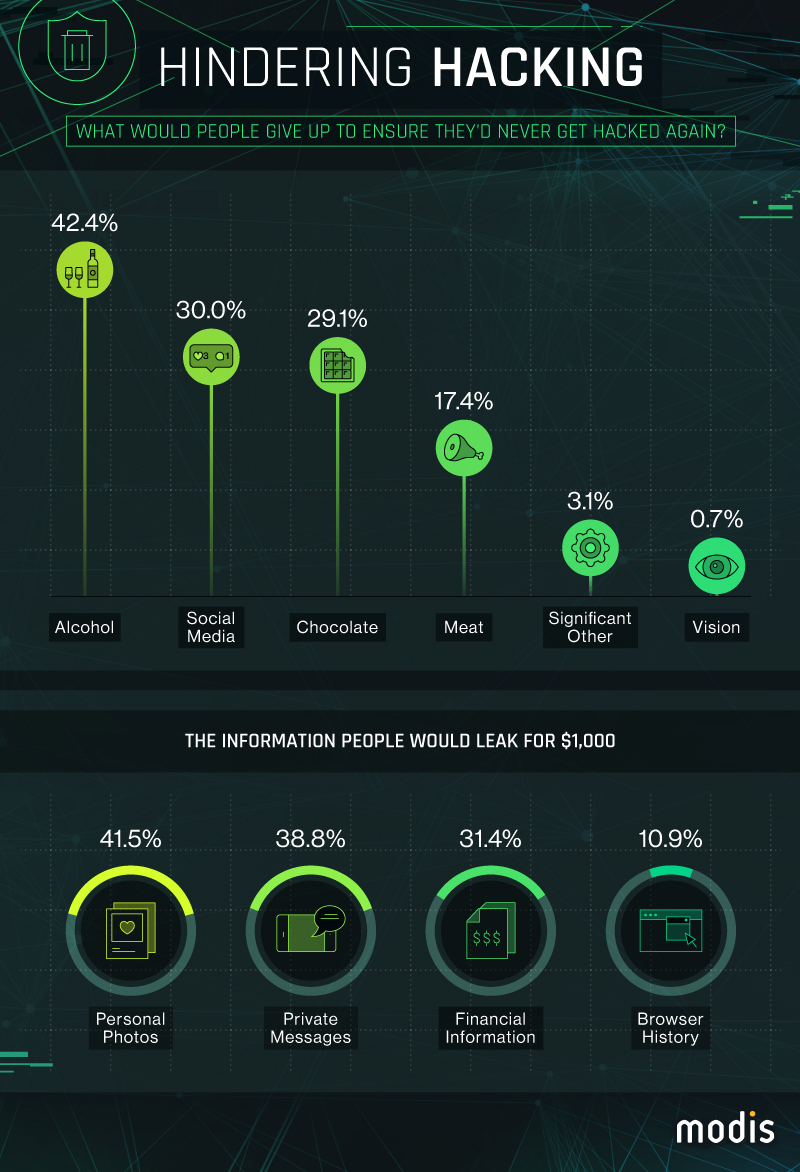 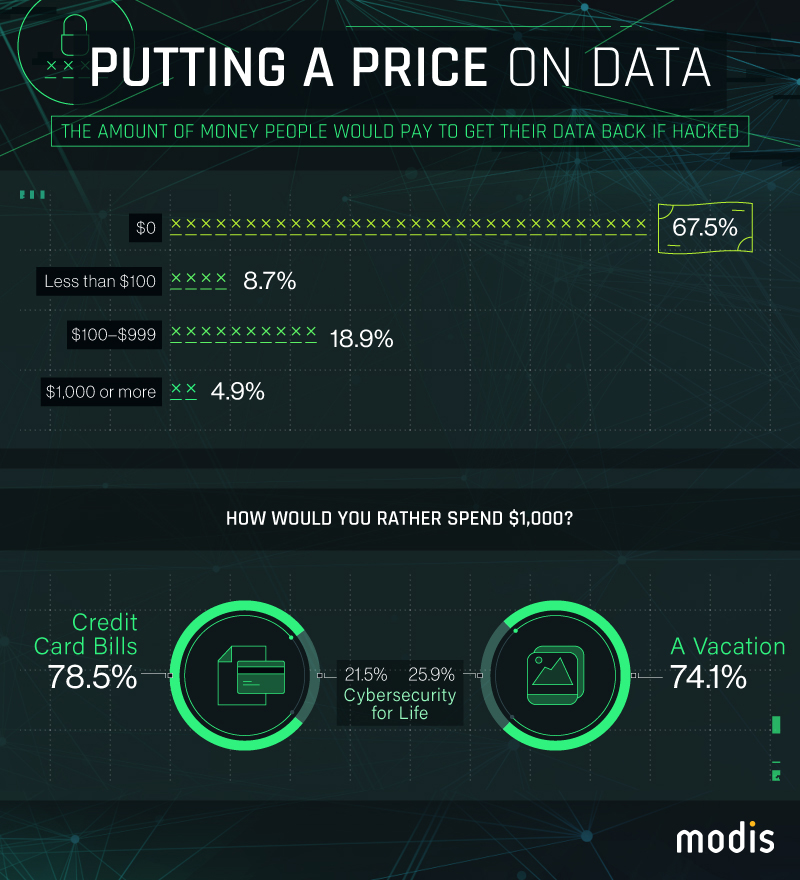 Our survey asked participants to share what they would be willing to give up if it meant never being hacked again. The leading response to this question was alcohol (over 42%), followed by social media (30%). However, they were least willing to part with their vision (less than 1%) – a pretty reasonable response.

But what would happen if $1,000 was on the line? What information would people be willing to leak for this money? Over 41% of respondents said they would easily leak personal photos for a grand, while nearly 39% were willing to part with browser history. Most everyone, though, was protective over his or her financial information. Only around 11% would be ready to turn it loose for the money.

Let’s say your data were hacked and you had the opportunity to pay a fee to get it all back. Would you? It turns out respondents weren’t willing to pay much to recover their data. In fact, almost 68% wouldn’t pay a single penny, and nearly 9% would pay less than $100. Around 19% would be willing to pay up to $999, and nearly 5% would pay $1,000 or more.

However, would people still ensure lifelong cybersecurity if $1,000 could go toward credit card bills or a vacation? Well, participants would rather pay off their credit cards (almost 79%) or go on a vacation (just over 74%) than take steps to secure their online presence for life.

Were you one of the over 169 million people who had their personal records hacked and exposed in 2015? Did you financially suffer because of the 89% of cyberattacks that involved stealing money directly out of your account? You might have gotten lucky, or you might need to add your story to the growing list of cyber offenses.

No one likes being hacked, but it might be worse to be out of a job. Protect your career by checking out the variety of employment opportunities listed at Modis.com. Don’t fall prey to cybercriminals – make sure you dip into a job market guaranteed to be secure. Your future self will be thankful that you did.

Our global experts are ready to help your business. Get in touch with one of our representatives today.